JORDYN GALLINEK
Jordyn Gallinek is an American composer, educator, and performing musician based in New York. She began studying music at the age of eight, discovering a passion for composition soon after exploring every instrument she encountered. She received a BM and MA from New York University, and then proceeded to attend The Juilliard School for her MM in Music Composition. In the fall of 2020, she stayed at Juilliard to pursue the Doctor of Musical Arts program as a C.V. Starr Doctoral Fellow, studying Music Composition with Robert Beaser.

Jordyn’s works have been performed in the United States and Asia, notably by the Juilliard Orchestra, the Sylvan Winds, the Oregon Wind Quintet, and the Cassatt String Quartet. She was the winner of the 2018-19 Juilliard Orchestra's Composition Competition and the 2018 Texas A&M Chamber Music Symposium's Composition Competition, and she has received commissions by both secondary schools and universities in the Northeastern United States. Jordyn has been awarded Composer Fellowships at the Aspen Summer Music Festival in 2021, the Norfolk Chamber Music Festival in 2019, and the Seal Bay Festival in 2017. While pursuing her degrees, she also studied with Christopher Rouse, Justin Dello Joio, and Joseph Church.

As an educator, Jordyn is currently a Teaching Fellow at The Juilliard School in the Ear Training and Music Theory departments. She teaches the Musicianship Program as a Musician in Residence at the Bader International Study Center at Queens University, and she also holds experience teaching primary and secondary school music theory, concert band, and general music.
Recent Performances


"Psalm 18, Death's cords were wrapped around me"
for soprano and piano
Wheeler Opera House at the Aspen Music Festival
Saturday, August 14th at 10 am (Mountain Time)​ 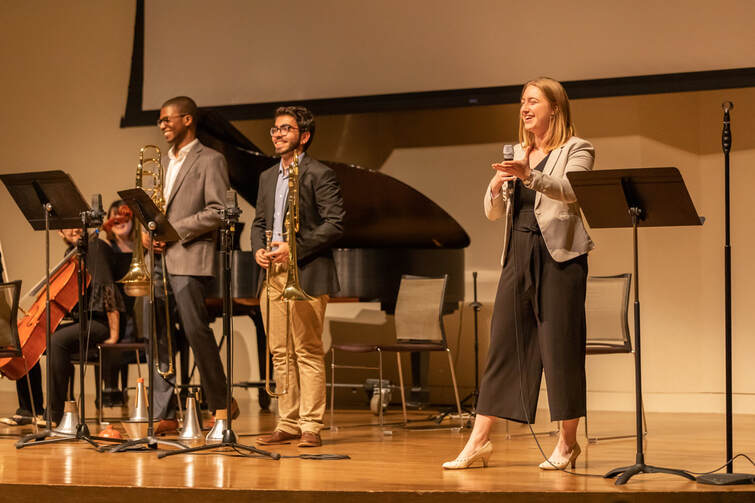